HomeFitnessIs the Garmin Fenix 6 worth it over the Forerunner 945?
Fitness

There is clearly a significant design difference, the Fenix range does a much better job of being a casual day to day watch than the Forerunner 945.

With the Fenix range being the flagship model for Garmin’s consumer lineup is it worth it over the Forerunner 945 which is often seen as an affordable Fenix?

What’s new on the Garmin Fenix 6

While the Fenix 6 offers lots of additional features compared to its predecessor, most of these features are bringing it line with the Forerunner 945.

What does the Garmin Fenix 6 have that the Forerunner 945 does not?

There are a lot more choices with the Fenix range as always. This obviously affects the price.

It is important to know that the standard Fenix 6 models (none-pro) lack both music and Wi-Fi.

It is also worth noting that the FR945 is due for a firmware upgrade to give it PacePro and new battery modes, two of the main features of the Fenix 6 series.

A lot of people seem to have an issue with the weight of the Fenix range, I have only used the Fenix 5S for an extended period of time, so don’t have much experience with the difference.

The Garmin Fenix 6 Pro comes in at 83g while the Forerunner weights 50g, that is a 66% increase in weight, so quite a big difference.

The overall size of the watch is almost identical, but it is the metal bezel and metal rear of the watch that will add a significant amount of weight.

The Fenix 6 series introduces 2 new smartwatch battery modes that significantly improve battery life, how useful these are to you is another question. For me, they will be handy on holiday if/when I forget my charger, but day to day use I want access to all the health tracking features too.

The Forerunner is available right now for £519.99 via Wiggle, Garmin and many other retailers.

Ther Fenix 6 series is available for pre-order from Amazon

Which is the best to buy?

There is not a lot of difference between the two models, you pay a premium the improved looks of the Fenix 6 Pro, and some minor spec improvements. This comes at a cost of weight.

Serious runners/swimmers may be better off with the Forerunner just for the weight advantage. People that do multiday endurance events will likely prefer the 6X Pro. Beyond that, it will be a subjective choice.

Comparing the Fenix 6 Pro to the FR945, I think the £70 is justifiable for the premium build and better screen. Garmin has already done well with the Fenix crossing over into the casual/style market and this is obviously their aim here.

I suppose one argument could be made that the Fenix 6 Pro is a bit pointless, the looks are not that different, and the features are the same. It is the Fenix 6S with its stylish looks and smaller form or the 6X Pro with its incredible battery life that are the two watches that really differentiate the Fenix 6 series from the Forerunner 945. 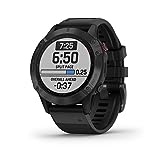 Maikel Du70 views1 day ago
70
The Garmin Tactix Charlie launched back in early 2018 and it is one of the last of the Garmin devices to be upgraded.The new Garmin Tactix Delta builds from the previous model while integrating all the features we love from the latest Garmin Fenix 6 and the Forerunner 945 before it.Related Content This Garmin Tactix Delta smartwatch was built to military standards MIL-STD-810 with a scratch-resistant domed sapphire lens and diamond-like carbon-coated bezel, so if the Fenix 6 sapphire editions don't cut it for you then this new model is the...

Maikel Du21 views1 week ago
21
OnePlus revealed its Concept One smartphone at this year’s CES 2020, and, more recently, it unveiled its Deep Dive 120Hz...

Fitbit, Garmin, Other Wearable Device Makers to Be Probed by US After Philips Complains

Cangir Trade27 views2 weeks ago
27
US trade regulators said on Friday they will investigate wearable monitoring devices, including those made by Fitbit and Garmin, following allegations...